Disclosure: Press demo is provided by XGen Studios via CowLevel and its Wild Rose Project. The demo contains the first two out of six chapters of the game and thus the opinions and thoughts are not representative of the product at its full release — as the title states, it’s merely a First Impression article. 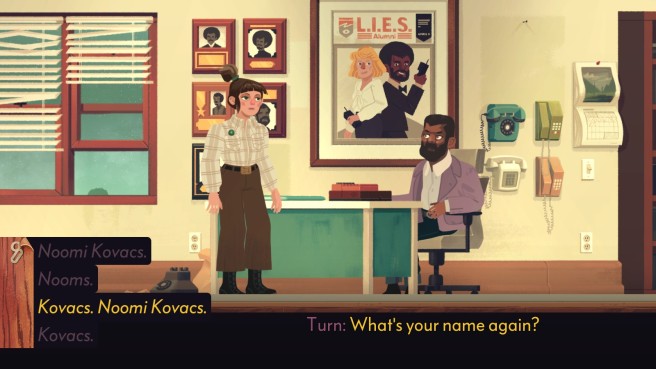 “Being a spy is nothing like you see on TV.” Says Turner, supervisor of Noomi Kovacs. It’s the year 1976 and corporate espionage is all about information gathering and manipulation and most of the work can be done without going outdoors, at least that’s what it’s supposed to be.

“Guess I’ll have to neutralize every other agent to secure my field work.” Thinks Noomi to herself in response. As an aspiring spy fresh out of academy, she decides differently, and that’s how the story begins.

The Low Road is a lovely Point & Click adventure game developed by XGen Studios. With its premises set in corporate espionage, 1970-ish rock soundtracks, its aesthetic style and vintage coloring, the game is pleasant to toy around, not to mention to look at and to listen to. Judging by how the story unfolds in the first two chapters the press demo provides, I believe the game is yet another generic adventure game of its kind, if not for its…

1. Witty writing. The game looks adorably good, as one may see from its screenshot showcase, but what I really like is how the game presents you with its clever-but-not-too-clever dialogs, genuinely funny and not excessive. And that’s what I’d rave about an adventure game, not to mention coupled with its…

2. Amazing voice-over, presumably one of the best I’ve seen in its genre. The voice actors certainly put a lot of effort into the characters without over-doing it.

3. Sublime original scores and how they are handled. Aside from its base quality, music gracefully emerges as your actions hit certain “soft spots” and I particularly love how they also serve as audio cues, telltale of progression and right path.

4. Adorable aesthetic style, from its graphic assets to the background, to its UI. 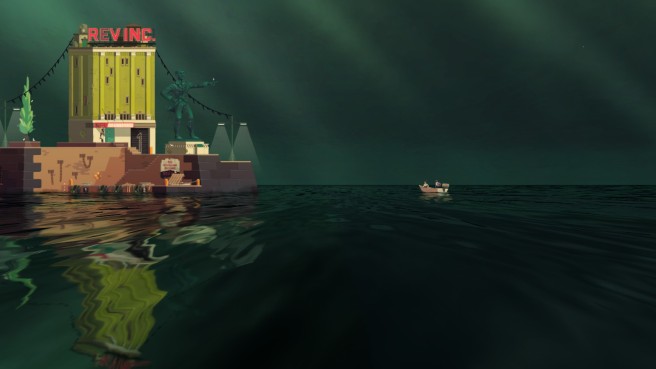 And I should mention as well that there was one time the game really caught me. At the beginning of chapter 2, after an automatic sequence, the player character shifted to another one. The transition was so natural and without prompt, I was really surprised for a second to find out I had assumed another character’s control — kinda reminded me of those wonderful transition moments in Final Fantasy VI.

Since the story barely unfolds within the first two chapters I’m provided, I cannot comment on the story. As of the narrative — I think it’s safe to conclude that it’s textbook Point & Click, but I can see how XGen refrains from letting the characters talk too much to themselves vocally commenting on everything they stumble upon and that’s decent. But the way they handle this change is partially by limiting items the player can interact with and thus, puzzles are more dense on each’s own, but scarce in number.

Most puzzles are first-person minigames, among which I’m particularly fond of the very first one, where you scan through a scrapbook, trying to pinpoint any information you may use to manipulate the person on the other side of the phone. I think the idea is good enough to make a game out of its own. That said, the game focuses on the more traditional aspect of Point & Click adventure games, rather than the minigames, and the decision from what I’ve seen so far is that minigames are thrown away after each use to keep it fresh (again, from what I see in the first two chapters).

And a clear disadvantage of this approach is that in order to keep up the diversity of puzzle segments, quality of them is largely varied. A plumber minigame is not really inspiring, and an arbitrary “which wire to cut” without proper hint is just… well, arbitrary. Thus, although the approach is decent, I would love to see the game revolve around certain minigames with further developed potential (by which I specifically mean the telephone one).

Character animation is not handled exceptionally well. Movement is a bit wacky, and when they ascend stairs the flaw is glaring. And although it’d sound a bit nitpicky, the lips are not synchronized with voice, not at all. (I admit this one really is nitpicky.)

Issues I’ve encountered (as of press demo): Albeit aforementioned wonderful VO, the game seems to have some glitches. Occasionally it has difficulty synchronizing subtitles and VOs, either the corresponding subtitles don’t show up or a piece of VO goes missing. Aside from that, the game sometimes suffers from framerate drops and occasionally freezes for a split second. Either of them isn’t a huge problem, but I certainly hope XGen can fix this before its proper release. 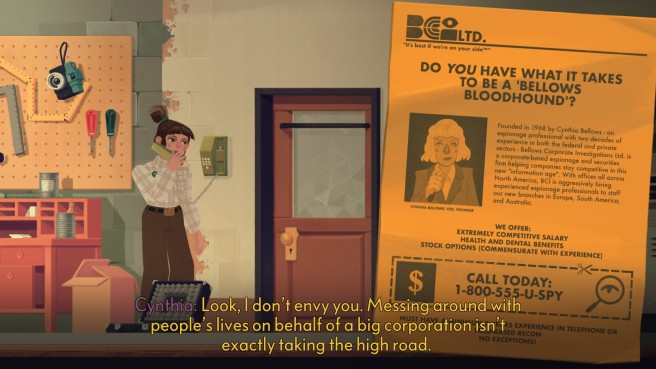 In conclusion, the Low Road is a decent Point & Clicker, if not outstanding. The game proudly proclaims that the gameplay is influenced heavily by LucasArts and Sierra classics, but takes a step forward and approaches differently. Even though this approach along with the game can use some more polish, any change to this genre, I believe, is welcome. That said, I can’t wait for its full release and behold how the story of Noomi Kovacs is going to unfold.