Disclosure: This review is powered by Wild Rose Project of CowLevel and the review copy is provided by its developer/publisher free of charge. Besides, the product is still an early access title (ver. 0.2.0.8117) and thus this review does not represent its full release.

I’ve never openly called a game a missed opportunity. That’s before I played Tower of Time. Don’t get me wrong, Tower of Time is a fantasy woven with great effort and love, which I adore, yet I cannot say the main components are in agreement with each other. That said, I do appreciate their passionate attempt to change the genre.

Tower of Time rids character progression of exploration progression, separates exploration and quests from combat scenarios, and disconnects combat from resources management. I think it’s fair to say they have taken rather a brave step forward from the shackled of RPG formula. From this point, they divide the game progression into three phases: exploration, combat, and outpost/character development/management, each independent from another. The idea is really refreshing, if not outstanding, and I believe that’s why people rave about it — however, I called it a missed opportunity because due to some issues this model isn’t really working out elegantly. And from here I’ll explain each part.

1. Exploration is pretty self-explanatory. Your characters venture towards and if prompted, interact with your mouse clicks and in this process, the narrative flows in as quests and dialogs. Aside from some ambushes, before you initiate a battle, you can always preview enemy types and detailed stats and decide whether to flee and to fight. Aside from the stiff camera movement during most of the scenes, not the most obvious points of interaction, my biggest complaint here is that the level design is a bit too video-gamey, far from immersive and convincing: you immediately know what the lever by a barred door does, not to mention all those chests of the same look (well, in fact there are about four variations) scattered across the game. Same goes for quests — the quality and quantity of flavor text and character dialog are telltale of their love and devotion, but the quests aren’t so graceful.

2. Combats happen in isolated arenas and that’s probably where you’ll spend most of the time. Any combat-related statistics are effectively absent prior to entering an arena, and thus combatants are always in their prime at the beginning of a fight. Each of your characters can have at most four abilities at a time, and they are conveniently bound to Q, W, E and R respectively. In combat you “have the ability to slow time at will”, but it’s not nearly as fancy as the way this sentence reads: it’s virtually a pause button like the one you’ve seen in those Infinite Engine RPGs and recent cRPG titles like Pillars of Eternity, which, upon pressed, you stop time in order to issue command: to move, to attack, to cast a spell, except that in Tower of Time the pause button slows time extremely instead of freezing it. Other than certain bosses, in every encounter enemies come in waves. Coupled with the lack of unit variety, some later encounters may be a grind — you just fight the same fight for many times in a row (and in large numbers), some of them are even in the same arena. At its best moments the challenge is just right with your limits pushed, other time battles are either too simple or too difficult (given that I chose normal difficulty). And for some reason they decide to make the majority of enemies ranged enemies, with the unnecessarily large size of the map, most of the time your melee characters are just running between spawn points.

3. Progression and development largely happen outside of the main game, but I’ll use two words before I go into details: Darkest Dungeon. It’s an outpost management, basically, you spend the resources scavenged from your expedition to upgrade buildings and by doing which you are allowed to level up your characters and items. This is a rather novel attempt, but the problem is that function-wise, the variety of the upgradable buildings isn’t something to write home about. Apart from the blacksmith, all serve but one simple end: leveling up characters. I believe that they first clung onto this idea and then found out that there weren’t much to upgrade, so they divided characters into groups and assigned them to different buildings to make sense. Each champion has six different skills from which you choose four, providing each certain degree of versatility. However, a large portion of those abilities are just a change of elemental damage and art asset, and thus I cannot say there’s a great variety of them. 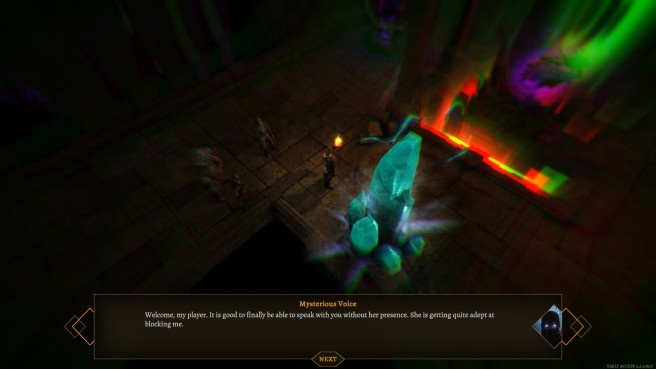 Those are the three main components of Tower of Time and that’s why I call it a missed opportunity. Theoretically, it’s truly innovative and a welcome break from the formula, but the idea is not executed well enough to break it down and make something refreshing out of it. That said, note that the game is still in its very early stage of development and I believe, in the future, the game will shine.

Other than the core game play, I was hyped the first time I started the game and was immediately greeted by the game’s premises, narrated by a mysterious figure that speaks directly to me, the player: a world in decay and wane, a carefree boy, and an adventure party venturing downwards seeking a cure for the land. As of now the story content doesn’t seem complete and I look forward to how it will unfold. The graphic is not outstanding, but the art is good. The music is decent, but the nature of its limited number makes it a bit tiring after a few hours. The UI is not the best in the world, but not something they can’t fix.

In conclusion, I’ll say I admire Event Horizon for their ambition and I love them for their love and devotion, but the game at its current state does not amaze me. Then again, it’s an early access title and I believe given time, the grape shall ripe.

The game is available on Steam.