The Wild West is an approximate area of the Americas, but it is not an area. It’s a vague period of time of Americana, but it is not a period of time. The Wild West is a set of scenes embodying a myth that is more convincing and scarcely accurate. I’m a big sucker for Spaghetti Westerns as of Sergio Leone, Clint Eastwood (as both an actor and a director), not strictly obsessed by classical western settings, but in them the conversation of man v. fate, and (or) man v. self. One reason why I also dig Dead Horizon here as well.

Despite how short it’s, Dead Horizon has easily been one of my favorite Western game. But before I start, I must warn you that although the thoughts are provoked by Dead Horizon, I do not think the developers were actively and consciously deconstructing the West as they were making the game accordingly, and I do not think the game is meant to be thought-provoking or deep. The game is put together lovingly yet playfully, but the writing shows whether conscious or not, the writer has a deep understanding of Wild West. It just got me thinking about my love for the Wild West, however preposterous, self-assertive and far-fetched my opinion may be, I really enjoyed it and thinking about it.

In Dead Horizon it presents a Wild West more magical than it often rather prefers to be, with the gunman being gunwoman, with a cyber samurai, a sheriff with a robotic arm, and a grim reaper figure, but the language is — whether the style of speaking the narrator uses, or the language de facto it conveys — the same: man v. society, man v. nature and man v. fate or self, common themes in both Spaghetti Western and older, more pastoralist Western.

Nature and the society don’t see eye to eye, but rather stand toe to toe. Like the tension between the Cowboy and the society. The Cowboy is neither, for often times he is at both the margin of society and wilderness freedom, a blurry line drawn between them. In the bizarre world of Dead Horizon, as Lore heavily indicates that silicosis is a more common cause of death in these parts (which is more realistic than the rest of the game), and the archrival in the end is even an effigy manifestation of dust storm itself, the gunwoman well represents the Cowboy’s struggle with society and man’s struggle with nature, in her fights with both man and dust and overcoming them.

Dead Horizon presents a rather nihilistic West, as the protagonist justifies that the killings are self-defense with no ill intention, and gradually the illusion shatters and she not begrudgingly comes to terms with her bloodthirsty nature and her pursuit of the thrill. Not unlike Clint Eastwood’s High Plain Drifter, it’s hard to tell if its violent and surreal end is redeeming. It may well be, as the narrator comments that this fight is meaningful, but in what way one can only guess.

The act of killing in this game, on the other hand, is of the most care and importance. Gameplay-wise, understandably since the whole game is built around gunning down folks, but narratively more so. Each head count is given a large amount of narration introspectively commenting and reflecting on the deed and on the dead. Hardly any killing sounds triumphant in this regard, as you are constantly reminded of how you’ve slain yet another person, whether in self-defense or not. The way I see it, they weight more than the protagonist is able to shrug off or admit, in which way they also build up to the character and the final confrontation. And that’s where fate has been leading her to, from overcoming men to overcoming herald of nature, and in it and in herself she attempts to find redemption.

In my not note-worthy opinion, Dead Horizon is the best Western game in settling the “Western-ness”, second to none. Apart from its decent writing, the reason I love it that much is because the way it handles killing in a presumably violent setting. Killing in games and in movies are handled vastly differently. In a movie, the whole duration may be used only to build up the final act, whereas the nature of video-games has to provide constant stimuli and stretch play time to justify a game’s price tag. I don’t think it’s a good time to bring up that ludonarrative debate here, but that’s how Nathan Drake gets 1,000 headcounts. Dead Horizon’s extremely short play time (around 10 minutes) works exactly in favor of the game, for it would lose its charm should it drag on unnecessarily and let the player kill more than the game needs to.

I refrain from writing “she’s a strong woman with powerful agency”, as nature treats men and women alike: the narrator in both main game and Lore explicitly says that dust tears up skin and leaving only bare bone, and kills by pouring sand into lungs. On the other hand, her womanhood is never present throughout the game as that trait is never exploited, but rather, she freely expresses her violent nature and is never deemed as a woman in the game, not by her father as he teaches shooting, nor by her first victim when he draws on her. Bonnie Starr is a pseudo-woman, I dare say in this regard. That’s one thing I may nitpick, but it really doesn’t matter.

There are games I got for free and that after playing I wish I could get my free time back. Dead Horizon is different. After those 10 minutes, I brought the extras DLC and gifted it to a friend that also enjoyed it, so that I could support the developers. I may have given this game way too much credit and thought, but I definitely enjoyed a lot. 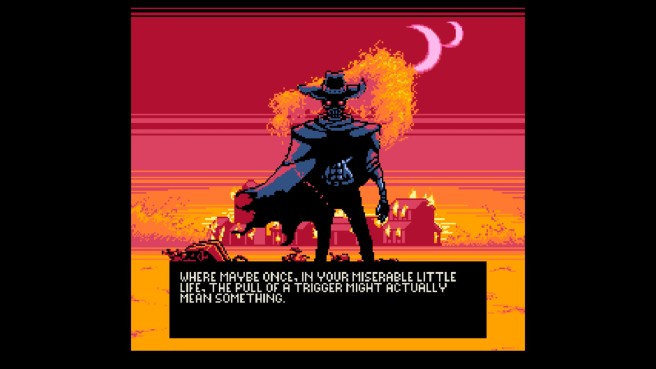 Dead Horizon is available on Steam and itch.io for free.